In the world of live performance our opinions as artists do not matter. What our critics, supporters, and mentors think of us also is not important. Only the audience in front of us matters. Are we connecting with them or are we not? Do they want more of what we offer or not? Do they want to buy what we have to sell?

Writers and poets, sculptors and painters have dealt this for centuries. The impressionist painter Manet responded to a critic who said, “Surely he is painting for his own amusement,” by saying, “Of course my painting amuses me, why else would I do it?”

Writer Herman Melville died unhailed, a pauper. He published Moby Dick himself, unable to interest any publishing house.  Melville’s fame was largely posthumous. We can only hope that our recognition is not similarly so.

Perhaps you know of singer songwriter Mary Gauthier. I saw Mary’s first open mike performance at Club Passim, it is how I met her. Her success is directly attributable to desire, courage, discipline, and talent. In that order. Although few people thought much of her in the beginning, I saw her artist’s soul. Because she allowed it to be seen. It is what makes her a compelling performer. Mary views herself as a writer. She is a performer because she is the vehicle for her material. Initially, it was hard for her to be so exposed and out of control. Later she learned to welcome that feeling as an indicator that she was on the right track.

When we write, what we think is all that matters. When we sing, or speak, we give the song/poem/story away. A song needs a singer and it needs a listener. By singing your song for others you make them collaborators in the communication: It then becomes important what the audience thinks. We may not want this to be the case, but it is nonetheless.

My response to knowing that it is important what the audience thinks of me, is to be afraid that they will think ill. My sensitive soul avoids judgment and rejection, so I erect barriers that protect it. Fear, doubt, and insecurity are the norm for a performing artist.

Successful performers learn to remove barriers while performing. Often, barriers assume their normal place upon exiting the stage. Have you ever met a performer whose off stage persona is different than on stage? I am not recommending this. I recommend you be who you are, perhaps with the volume turned up a bit. But better that you learn to succeed on stage and get paid. Then you can afford professional help to deal with the other 23 hours.

As I say in the opening of my book, “If it was easy anyone could do it.” 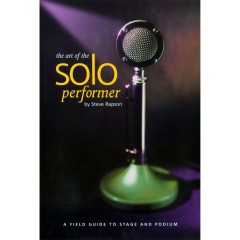 I recommend you buy a copy of my book www.soloperformer.com and read it. Try to apply the ideas and suggested actions to your own act. When I speak to performers I tell them that when I do everything in my book I succeed. My friend Sam Bayer www.sambayer.com told me, “Rapson, I agree with everything you say to do, I just don’t want to do all that work.”

I Practice What I Preach 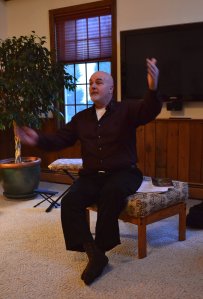 I opened for Kevin So a few years ago at Club Passim. I wanted to do a good job so I worked harder than I usually do on my 30 minutes. I had another gig in New Hampshire later in the week. I thought I should not squander all my preparation for Kevin’s opener, so I resolved to do everything in my book that I advise others to do. This involved even more intensive preparation, pre-show work when I arrived at the gig, and all the mental and physical work I recommend. If you do read my book, at each juncture you may ask yourself, I wonder if Steve did that?  The answer is yes, I did 100% of what I suggest others do. Sam is right; it is a ton of work.

So how did it go? I killed. It was the end of January in New Hampshire. Outside it was below zero. Inside there were about a hundred people in the room (free concerts sponsored by the town library).  Taking my own advice worked.

I advise artists “find whatever you are most afraid of, and go there.” That it is where the good material is. Do it in your writing and in your performing.

So what am I most afraid of? I am afraid of being on stage without my guitar. I am a solo guitarist. My act is built on my guitar playing.

At the last minute I thought that since I am so afraid of standing in front of a crowd with no guitar to hide behind, that I should do that. So I started my act with a poem I had written, standing naked, sans guitar.

And, Lo! It worked. I had faith in my material and went where I was afraid to go. I set myself on fire as Don White suggests.  www.donwhite.net

After the show I spent a half hour signing CD’s and chatting with the people. I sold to 30% of the room. The girl selling my CD’s in the back lectured me that I would have sold many more if I had not run out of the popular titles. This does not happen all the time. But it never happens unless I do the work required. And even then sometimes not. But it happens enough for me to do it whenever I perform. I swing for average and take the home runs as occasional blessings.

Prepare To Be Your Best

A performer once wrote me:

I have a sensibility that forbids me from exploiting affectation to manipulate less sensitive listeners. I hope, paradoxically, that this is one of my strengths as an artist.

Many performers say similar things to me during coaching sessions.

However, being honest and open, being vulnerable and emotionally accessible is not an affectation. Further, our audience is sensitive, and smart. They know when they are getting the good stuff and when they are not. Affected is the last thing you want to be.

Here is the big secret: How do you feel when you are relaxed and comfortable with people you care about and who you know care about you? How do you behave in that environment? Summon that feeling for the stage and let your feelings guide your actions.

It is work to be yourself on stage. When you are comfortable being yourself, the next level is to be yourself at your best: you with the volume turned up. Good material, thoroughly prepared is a given. Once you have the material, you must hone your presentation of it. This includes your feelings and the behaviors, however subtle, they engender.

It is the misperception of the amateur that anything that is not spontaneous and unplanned is phony and exploitive.

This is not easy, and most of the people I have coached have been unable to do it. My coaching strategy is usually reductive, not additive, i.e. stop doing that, move less, say less, or in extreme cases, say nothing.

If I can do it, most can do it. The ability to do it is different from the discipline and the courage to do it.

The singer is the vehicle for the song. If you believe in your song, your story, your poem, then your mission is to be the kind of performer that brings it to a wider audience. When your actions are about the mission and not about you, then you can be free of any restraints you put on yourself.

My friend Bill Fitzpatrick of www.success.org, says to be successful, copy those who are successful. So here are some recommended performers to watch: HBO’s Def Poets; The Vagina Monologues; Rickie Lee Jones Live at the Wiltern Theatre; Stop Making Sense (a movie of the Talking Heads Live show); Say Amen, Somebody;

Richard Pryor Live In Concert (also Richard Pryor Live on Sunset Strip); Jerry Seinfeld’s movie: Comedian; Margaret Cho Live – Notorious Cho (not for delicate sensibilities); and anything with the Dali Lama speaking to an audience.  And I am sure you have several examples of your own that have inspired you.

Most of these are available at Amazon on DVD. Each performance exemplifies what I am talking about in bringing one’s whole self to the stage: great material, top notch performance, and an emotional accessibility that cannot be faked or affected.

All those things are there because the performers have learned that this is what it takes to succeed, even if they feel uncomfortable being so accessible (as in the case of RLJ, where her discomfort shows in the beginning). Eventually it feels good. I think you will be exhilarated, inspired, and humbled by these examples of performance art at the highest level.

I am a fan of humility, for it is the soil where we grow best.

Steve Rapson is a song writer, concert guitarist, and author of  The Art of The Soloperformer: A Field Guide to Stage and Podium.