I fell off a roof last month. I didn’t want to fall off the roof. I tried hard not to. I clutched the roof with all my might as I slid from peak to eaves. I clutched so hard the ends of three fingers were torn off. And, in spite of all the clutching, I fell anyway.

I was painting the ridge board, backing along the peak and stood up as I neared the far edge so as not to fall off. I stood, turned, and stepped, saw my paint rag under my descending foot and thought, Don’t step on that rag, you’ll slip.

After I stepped on the rag and slipped, the fall happened quickly, but time slowed. This allowed for a thoughtful descent.

I have fallen out of trees, off galloping horses, into sand pits, off ladders and fences, out of second story windows, and from other roofs I have known.

I have fallen out of moving cars and off speeding motorcycles. While drunk in the former, sober in the latter. One of my favorite ways to fall is to have a car door flung open in front of my bicycle. In martial arts class the sensei used me as demonstration throwing dummy.

One could say that I have earned a PhD in falling.

After thought three, (Shit, I can’t believe I am going to fall off this roof) I went into fall mode, which, at its core is, Oh, well, relax and go with it.

I hit the ground falling backwards. I tucked my chin to my chest and rolled, doing a complete somersault. Momentum carried me back to my feet, facing the building. I came to a halt with my arms in the air, like a gymnast landing a vault. Two inches to my right was a stack of concrete blocks. Had I fallen on them, this story might be delayed for weeks, or longer. I wiggled around, amazed that all parts were in place and operational. In my right hand I still gripped the paintbrush. Don’t know why I didn’t let go of it. But it saved the right hand fingers.

On the other hand…

Blood, lots of blood, obscured what was the matter. I shook the hand to see the damage. This was a mistake. First because up till then there was no pain, second, I totally saturated my pant legs with sheets of spattered blood. I looked like a scene from CSI. I became light headed, and dropped to one knee.

Speaking of pain, let’s. First, the happy news: significant trauma is not initially painful. Later, it is. Still, it is hard for me to remember just how much it hurt, even during the initial washing, and the repositioning of the torn off tips–though still hanging by the most tenuous of threads–or the wadding of a paper towel, which I held in a bloody, oozing fist. I vaguely remember driving myself to the hospital eight miles away.

I fell about 12 feet. Not that big a deal. But the emergency room personnel ignored my bleeding all over the place and took me in for X-rays. It seems that if you fall twice your height, the odds are good for back or neck injury. This was their concern and not my painful fingers. I kept pointing them out, they kept ignoring them.

They did ask about my pain, “On a scale of 1 to 10, Mr. Rapson, with one being no pain and ten being the most pain, how much pain are you having right now?”

“My pain goes to eleven,” They were all young and didn’t get the Spinal Tap gag.

The doctor said I was lucky to retain the fingertips as they usually are torn away or need to be snipped off, making for a lengthy healing process. She said she’d try to save them by stitching them back on.

It’s hard for me to remember what it felt like when the doctor injected anesthetic right into the open wound of each finger prior to stitching. Rather than scream, I laughed out loud and told the doctor that this was the most pain I had ever felt.

“I know,” she said, “the finger tips have so many nerve endings. One more to go; do you want to take a break?”

“Please get it over with,” I whimpered bravely, enduring another needle of doom and then 27 stitches.

So it is only the memory of what happened during the pain that I can report. The actual feeling of the pain I cannot quite recall or adequately describe. This is why women can have more than one child. If they remembered childbirth pain, all they’d be saying is, “Get away from me with that thing.”

The poetic irony of my injury is that I had been preparing for six months to compete in The Walnut Valley International Fingerpicking Contest. I had practiced the same four songs* for two hours a day right up to the day before I left, which was when I injured myself. Everything was paid for, and Rosemary said I could go if I demonstrated that I could change my bandages by myself. Which I did. 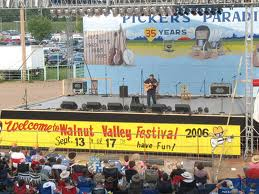 So I flew to Winfield, Kansas and camped for ten days with 15,000 other guitarists, mandolinists, banjoists, fiddlers, dulcimerists, and dobroists. Perhaps God knocked me off that roof so I would just listen to all those marvelous players. I found it truly beneficial and a personal growth experience. For the future, dear Lord, a burning bush will do.

I pray for humility every night. In Winfield my prayers were answered with great players showing me what I don’t know.

Further humbling me was Garry, a fellow camper, who helped me change my bandages every day. He didn’t ask if I wanted help, he just sat down and said, “Let me help you with that.”

It is hard to accept help, but doing so allowed me to plumb the depths of humility. I was so humble there wasn’t any left for my fellow campers. My quest for true humility is cursed, however. Because, should I ever think I had attained perfect humility, I would surely be proud of my achievement.

And finally, to show you the power of positive thinking, when I saw the damage to my fingers, my first thought was, I could always play the Dobro.

Steve Rapson lives in Boston, Massachusetts. He is the author of The Art of the SoloPerformer: A Field Guide to Stage and Podium. A guitarist and recording artist he has seven CD’s in release. His web site is http://www.soloperformer.com/